“We are delighted to accept the ABA100 Winner for Software Innovation [SWR] award in recognition of the BT Cyber Security Platform (CSP). CSP is a next-generation Security Analytics platform, built on big data infrastructure using machine learning as well as AI techniques. It provides real-time monitoring and facilitates the rapid detection, analysis, and response to cyber-security threats. In today’s environment of continuous cyber-attacks and daily reports of data breaches, tools such as CSP help security professionals to fight back and keep their organisations more secure.”

BT is one of the world’s leading communications services companies serving the needs of customers in the UK and in 180 countries worldwide. Around the world, BT’s Global Services division supplies managed networked IT services to multinational corporations, domestic businesses, as well as national and local government organisations. BT have around 17,000 people worldwide supporting over 80% of Fortune 500 companies in 25 languages.

BT’s presence in Australia commenced in 1987 with the opening of the Sydney office, and now employs around 250 people across Sydney, Melbourne and Perth. They have a particularly strong track record in the Global Banking and Financial Markets industry as well as in Mining Services, and are now building on these foundations with cybersecurity strategy. BT has a long history of innovation in security. During WWII Tommy Flowers, an engineer for the General Post Office, developed the world’s first programmable electronic computer in the world to crack war codes.

Today, BT has one of the largest dedicated security practices in the world, with over 2,500 security professionals and 14 Security Operations Centres (SOCs) globally that manage and monitor hundreds of thousands of security devices for more than 860 organisations. In 2012, BT protected the London Olympics against daily hacktivism attacks and 212 million malicious connection requests.

In September 2017 BT announced the launch of a cyber-security R&D hub, with plans to hire up to 172 new roles for the cybersecurity R&D function over 5 years, including 38 graduates, as well as a system integration services team for cybersecurity installations. It is this hub that has developed the BT Cyber Security Platform (CSP). The advent of big data and advanced analytics have ushered in a new era for security monitoring and a new solution category — Security Analytics Platforms. These platforms use big data technology and advanced analytics to rapidly examine events, looking for patterns that could be indicative of malicious activity, facilitating the analysis and investigation of incidents, enhancing and automating response, and predicting imminent attacks before they cause damage.

The architecture for the BT Cyber Security Platform has existed in one form or another since 2015. The BT network is vast and its many devices generate huge volumes of log information. BT’s security architects realised that the architecture of the traditional Security Incident Event Monitoring (SIEM), platforms they had been using up until now would not scale to meet the ever increasing demands of the network and the high volume of data being generated. So, the CSP architecture was born out of this need, but required the right development team to bring it to fruition. 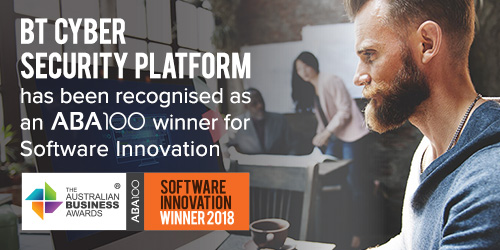 For further information on BT Australasia go to bt.com

How to Participate in the Awards